Since the beginning of time, the Earth’s ocean has been an enigma of sorts — sometimes revered, other times feared or looked at as an obstacle to overcome. The ocean is responsible for global weather patterns and is widely considered the origin of all life on Earth.

In an effort to quell the mystery of the Earth’s ocean, it has been studied and subsequently divided throughout history. And that’s where things get a little tricky — the number of oceans on Earth isn’t a uniform number.

Instead, the number has varied widely across time periods. Even today, geologists can’t seem to agree on the number of oceans: Is it one, four, five, or even more?

The complex answer is “all of the above.”

What is an Ocean, Anyway?

The simple definition of an ocean is a body of salt water that’s located on and/or under the surface of a planet. An ocean is typically distinct from a planet’s surface in regards to geologic composition.

Here on Earth, the crust is mainly comprised of granite, while the rocks that cover the ocean floor are basalt. Data indicates that the ocean floor first formed about 200 million years ago. Further, some ocean floor rock has magnetic properties.

Boasting an average depth of just over 12,000 feet, the Earth’s ocean is made up of about 3.5 percent salt. Traces of every chemical element found on Earth are present in the ocean. At its deepest, the ocean floor is located more than 36,000 feet below its surface, in the Pacific Ocean’s Marina Trench.

But where does one ocean end and another begin? That can depend on a number of factors, including changes to plate tectonics and overall sea level, and even the world’s geopolitical climate.

How Many Oceans Are There? 1 For a Few. 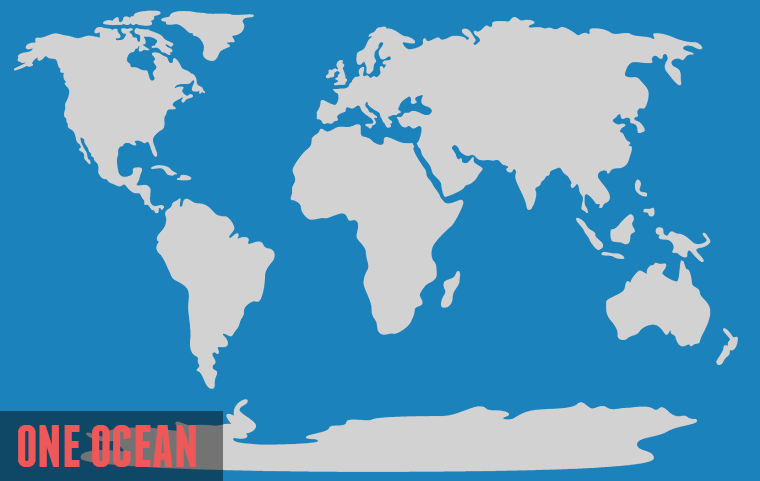 Celebrated on June 8, World Oceans Day was officially recognized by the U.N. in 2008. The designation was the brainchild of The Ocean Project, a wide-reaching organization that touts the existence of a single global ocean, one that’s divided into several distinct regions. The so-called “World Ocean” comprises more than 71 percent of the Earth’s surface, a whopping 320 million cubic miles of water.

The concept of a single, global ocean dates back at least to Ancient Greece, embodied by the god Oceanus, one of the Titans. The world was somewhat small to early Greeks, so a single ocean makes sense within their limited worldview. Later explorers and scientists would divide the World Ocean into several regions.

How Many Oceans Are There? 4 For Others.

For elementary and primary students throughout the 20th century, learning about the oceans was one of the earliest concepts in geography. Until the year 2000, it was generally accepted that there are four oceans on Earth: the Atlantic, Pacific, Indian, and Arctic Oceans.

How Many Oceans Are on Earth? 5 For Some. 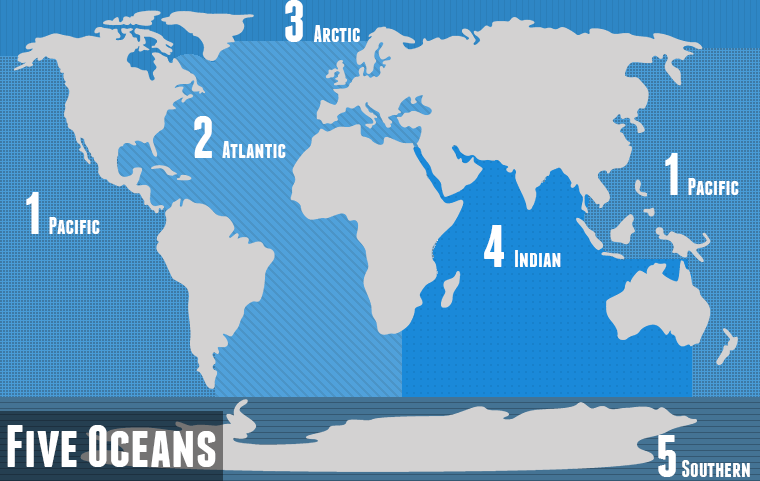 The International Hydrographic Organization publicly announced their endorsement of a fifth ocean region in 2000, which they named the Southern Ocean. Its boundaries remain in dispute, but most countries accept that the Southern Ocean stretches from a latitude of 60 degrees South to the edge of Antarctica. 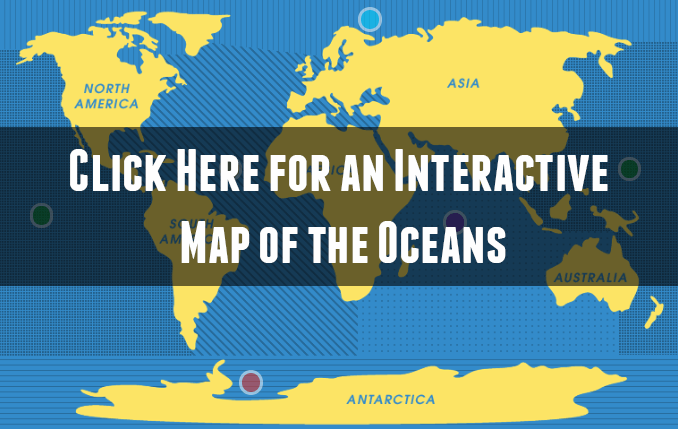 The Global Development Research Center, among many other organizations, recognizes five global oceans, each distinct in regards to size, depth, and current direction.

The Atlantic Ocean also encompasses the Caribbean Sea, the Gulf of Mexico, the Labrador Sea, and Iceland. Just off the coast of Puerto Rico, the Atlantic sinks to its deepest point of about 28,000 feet.

On some maps, the Atlantic is further divided into the “North Atlantic” and “South Atlantic.” The Atlantic meets the Pacific at Cape Hatteras, on the tip of South America, and collides with the Indian Ocean just south of the African continent.

The world’s largest ocean, the Pacific covers more than one-third of the Earth’s surface, a total of more than 64 million square miles. It is home to the Marina Trench, the ocean’s deepest point, as well as the volcanic system known as the “Ring of Fire.”

There are an estimated 25,000 islands within the Pacific Ocean, some of which are small and uninhabited. Others are home to millions of people, such as Honshu, the biggest island of the Japanese archipelago. Honshu boasts a population of more than 127 million.

Bordering the western coast of Australia as well as parts of Africa and South Asia, including the Arabian Peninsula, the Indian Ocean covers roughly 28 million square miles. With an average depth of 12,762 feet, it meets the Pacific near Australia. The Indian Ocean’s deepest point is the Java Trench.

The Bering Strait connects the relatively tiny Arctic Ocean to its massive neighbor, the Pacific. Comprised of both salt water and chunks of ice, the Arctic Ocean spans about 5 million square miles. The frigid ocean borders the northernmost parts of North America, Europe, and Russia.

The newest addition to the list of Earth’s oceanic regions, the Southern Ocean is the smallest of the five. It’s also the most uniformly shaped, forming a concentric circle around the entirety of Antarctica. Like its northernmost arctic neighbor, the Southern Ocean contains a large amount of sea ice.