Jamaica is one of the hottest vacation hot spots in the Western Hemisphere. The island nation is known for its distinctive food, music, and all-inclusive resorts. Its rugged mountain ranges, unexpected waterfalls, and aqua-colored lagoons are also big attractions for the world’s tourists. While finding things to do in Jamaica isn’t a challenge, identifying the continent to which Jamaica belongs is. 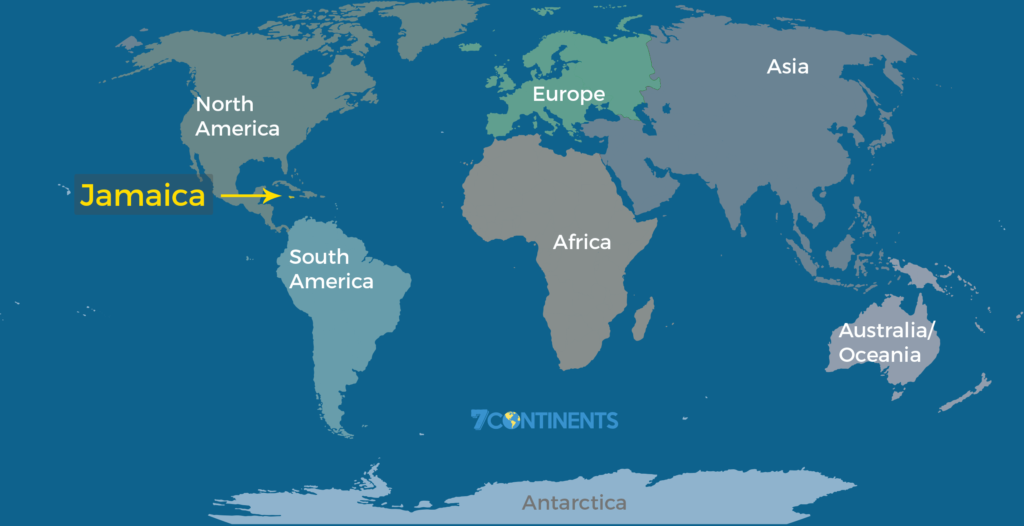 What Continent Is Jamaica In: North America or South America?

Jamaica is located about half-way between North and South America, which is why you’ll get mostly puzzled looks if you ask people about the island nation’s continental association. When it comes to geography, most experts consider Jamaica to be a North American territory. Jamaica lies on a latitude that is about two degrees south of Mexico. In contrast, the nation is about six degrees north of Venezuela, which is its nearest non-island, South American neighbor.

You’ll find Jamaica in the heart of the Caribbean Sea, and it’s the third-largest island in that region. The Greater Antilles chain of islands that include Cuba, Hispaniola, Jamaica, and Puerto Rico dominates the area. Since both Mexico and Venezuela are blessed with coastlines that touch the Caribbean Sea, the debate about whether Jamaica is in South America or North America will likely persist.

Does Jamaica’s History Point to a North American or South American Origin? You Decide!

Jamaica was part of the land that Columbus discovered during his commissioned voyages to the New World. When he arrived in Jamaica in 1494, the Taino native people greeted him. They spoke an Arawakan dialect, and their name means “the relatives” in Arawak. Diseases, enslavement, and wars with Spanish colonists who settled in their territory between 1500 and 1655 left Jamaica’s Taino native people nearly extinct.

England captured Jamaica from the Spanish in 1655, and they continued Spain’s practice of bringing West African slaves to the island to work on sugar and tobacco plantations. Jamaica stopped slavery in 1838, but it wasn’t until 1962 that it became an independent nation. Jamaica keeps its status as a UK Commonwealth Nation and has liberal travel and immigration policies among the UK and its other former colonies.

Jamaica’s Food Mixes the Best of North and South America

Jamaica is a food enthusiast’s paradise, and its entrees are generally spicy and full of fresh flavor. Jamaican meals mostly consist of a variety of vegetables, fish, and meats such as chicken and goat. Pork and shellfish aren’t part of its signature dishes. While these foods are also commonly eaten in North America, they change totally when skilled Jamaican cooks apply spices and culinary fusion techniques to them. Jamaica’s cuisine is also influenced by the native plants of the region. For instance, Jamaica and its neighbors in Central and South America use cassava in their dishes.

Conclusion: Jamaica Has a Vibe That’s All Its Own

Jamaica’s natural resources, hard-working people, and modern infrastructure make it one of the Caribbean’s crown jewels. While North American and South American countries would love to claim the beautiful island, Jamaica has a distinct attitude that makes it unique in the region.