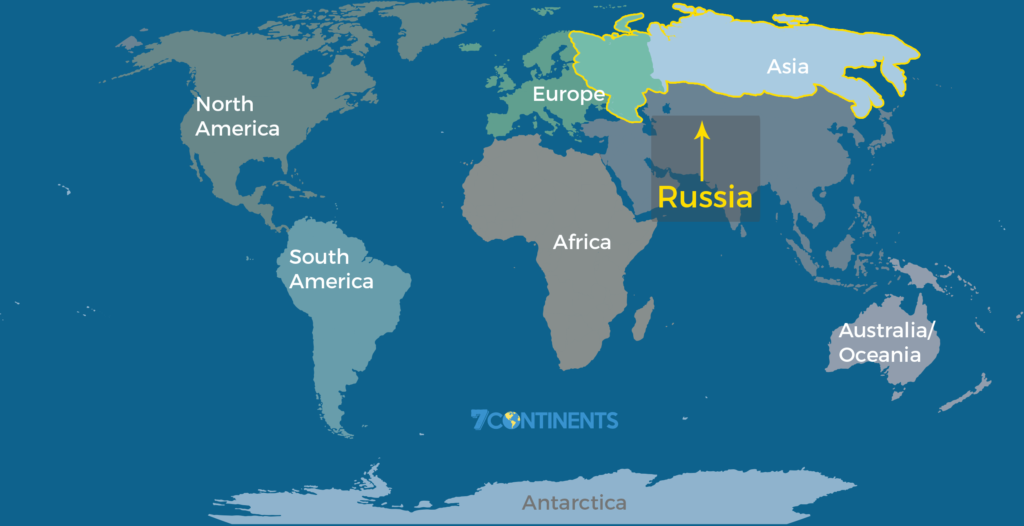 Russia is the world’s largest country, and its 7 million square miles are stretched from a border with Norway to one with North Korea. Considering how large it is and the varied cultures of the 14 countries that border it, there is no simple answer to the question, “Which continent is Russia in?” Some of you might quickly respond by saying that it’s not in a single continent but that it’s actually in two, Europe and Asia. However, consider that a valid reason exists for considering Europe and Asia as a single continent. But wait. We’re not done. Did you know that Russia used to be part of three continents by many people’s definitions? Are you intrigued? Read on as we explore which continent or continents Russia is and at one time was a part of.

The dividing lines between continents are not always easy to define. Well, sometimes they are. For example, Australia is viewed as a continent by most, and it’s an island, so it’s easy to determine where that continent begins and ends, at the water’s edge. For those who view North and South America as separate continents, not as one, it has generally been agreed upon that the dividing line is the Panama-Colombia border. However, that is not the case between Europe and Asia, especially to the south of Russia. For example, numerous disagreements exist as far as whether Azerbaijan, Armenia and G, orgia are part of Europe or Asia.

However, the Europe-Asia border for the majority of where that line crosses Russian land has been defined simply as the Ural Mountains. This mountain range is about 1,600 miles long and 95 miles wide with mountains that reach as high as 6,217 feet into the sky, and it generally goes from north to south across Russia with part of it reaching into Kazakhstan.

So, the most common answer to this question is that Russia is in both Europe and Asia.

Using this dividing line puts about 8 million square miles of Russian land in Asia and 3 million in Europe. By that measure, Russia is very much more of an Asian country than a European one. However, you should also take into account that roughly 75 percent of Russia’s population lives on those 3 million square miles of land. And answering the question, “What continent is Moscow in?” results in a quick response of, “Europe.” In fact, another major population center, Saint Petersburg, is also in the European part of Russia. Conversely, the largest city in the Asian part of Russia is lesser-known Novosibirsk. Perhaps Russia is more European than it is Asian in the end? It’s not a simple issue to analyze, which continent Russia is more tied to, considering these two facts that pull it in different directions.

For that reason, it’s easy to see why the Russian people and the Russian government often do feel pulled in different directions. Sure, those located well within the European portion may define themselves as European without hesitation while those living in Siberia and, especially so, Vladivostok, just 100 miles from North Korea, would generally say that they are Asian, but, as a whole, Russia does seem pulled in two directions. It’s been this way for some time and likely will continue for some time as the country continues to form its identity as a country and its status within these two continents and within the world as a whole.

Russia Is in One Continent?

Another way to look at answering the question, “What continent is Russia in?” is by simply saying that it is located in one continent, not two. And it’s not Europe or Asia. It’s Eurasia. The reason for this is because mountain ranges generally don’t split continents into two. The Rocky Mountains don’t. The Andes don’t. The Alps don’t. So why should the Ural Mountains be used to divide Europe and Asia into two continents? So, if this definition is used, the answer to that question is a massive landmass that is home to 36 percent of the world’s land and 76 percent of its population. Russia alone accounts for 31 percent of Eurasia’s land although just 3 percent of its population.

Russia Used to Be Part of Three Continents

As long as most are answering the question, “Is Russia in Asia or Europe?” by saying, “Both,” we need to take note that Russia actually used to also have land in a third. This is because Russia crossed the Bering Sea and settled in Alaska in 1784. Fifteen years later, the Russian American Company controlled Alaska and even settled as far south as Bodega Bay, which is located in California just 40 miles northwest of San Francisco. However, by the middle of the 19th century, Russia was nearly bankrupt. It ended up selling Alaska to the United States in 1867 and left the Americas at that time.

Other Countries That Are Part of Multiple Continents

Russia is not the only country to be defined as striding or otherwise part of multiple continents. Perhaps the most famous other example is Turkey. In fact, its capital city of Istanbul is divided by the Bosporus into Europe and Asia with parts of the city lying in both. Meanwhile, Egypt is seen as being in both Africa and Asia as the Sinai Peninsula, which is located to the east of the Suez Canal, is in Asia.

An additional country to consider is France. Although mainland France is very much in Europe, not really all that close to either Asia or Africa, it should be noted that it also owns land around the world, land that is as integral to that country as Hawaii is to the United States. For example, Guadeloupe and Martinique are in the Caribbean, commonly accepted as part of North America, Guyana is in South America, and Mayotte and Reunion are in Africa.