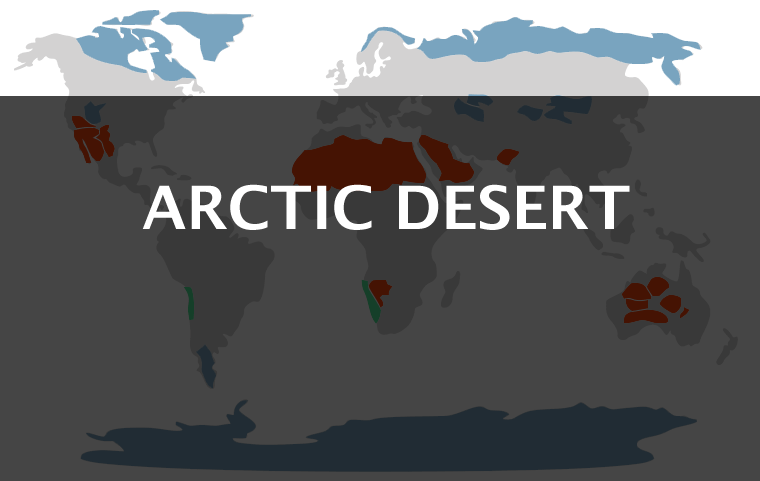 When you hear the word “desert”, what immediately comes to mind? If you are like most people, “desert” evokes images of large expanses of sand, high temperatures, and shrubby vegetation. To some extent, such images are accurate. Most deserts have lots of sand and high temperatures (at least during daytime).

However, there is one desert which doesn’t have these things. This desert doesn’t have a large expanse of sand. The temperatures there aren’t hot at all – in fact, they are rather chilly. This rather strange desert is the Arctic Desert.

If you know anything about the Arctic, you are probably wondering why anyone would have the nerve to call it a desert. After all, doesn’t the Arctic have an entire ocean in the middle of it (i.e. the Arctic Ocean)?

Yes, the Arctic does have an ocean. However, Arctic temperatures are so low that the ocean is always frozen. The extremely low temperatures also mean that the Arctic air isn’t able to hold moisture. The air is therefore as dry as you’d find in a desert.

Geography Of The Arctic Desert

The Arctic Desert is located towards the earth’s North Pole. Its location is above 75 degrees north latitude. It covers a total area of about 62,300 square miles. The Arctic Desert is composed of a number of islands, many of which are inhabited by people and animals.

The geography of the Arctic Desert is made up of different physical features. The most common of these features are mountains, glaciers, and flat areas.

Mountains: The Arctic Desert contains mountainous areas. The mountains are typically cold and dry. In appearance, some of them look kind of like the mountains of Central America.

Glaciers: A glacier is a large, solid mass of ice. Because of its extremely cold temperatures, the Arctic Desert has numerous glaciers.

Flat Areas: The flat areas have distinctly patterned textures. These patterns result from the melting and freezing cycles of water in the Arctic Desert.

If you have watched Game of Thrones, then the Lands Beyond The Wall, can give you a rough idea of what the Arctic Desert looks like. Those scenes were shot in Iceland. Although Iceland isn’t officially considered part of the Arctic Desert, it bears close resemblances to it – at least in terms of physical appearance.

Climate of the Arctic Desert

The most interesting aspect of the Arctic Desert is its sunshine patterns. During the summer months, the sun doesn’t set at all. In fact, for a whole 60 days, the sun remains hovering over the horizon. This means that even at midnight, you can see the sun. These days of endless sunshine are followed by a period in which the sun doesn’t rise at all.

Plants and Animals of The Arctic Desert

Only about 5% of the Arctic Desert has plant cover. This shouldn’t be a surprise given its desert status. Even then, the majority of the plant-life is composed of desert plants like lichens, mosses, and algae. These are the types of plants which can survive in the extreme conditions of the Arctic.

Annually (especially in the warmer months), a few shrubby plants grow. These shrubs can range between 5 and 100 centimeters in height. The common shrubs include sedges, liverworts, grasses and different varieties of flowers.

The animal life in the Arctic Desert is quite diverse. There are numerous mammals, birds, fish, and insects. All these animals are adapted to the extremely cold temperatures of the desert. Some examples of animals include:

Birds – ravens, falcons, loons, snow huntings, sandpipers, snow birds, terns and different species of seagulls. Most of these birds are migratory (i.e. spend part of their life cycles in the Arctic Desert).

In total, there about 700 plant species and around 120 animal species in the Arctic Desert. Both the plants and animals are adapted to survive and even thrive in the Arctic conditions. The plants are usually able to grow in the cold, infertile soils. The animals typically have thick layers of fat to protect them from the cold. They breed in the short summers and hibernate in winter. The birds typically migrate south during the cold winter months.

People and Cultures of the Arctic Desert

The most popular inhabitants of the Arctic Deserts are the Inuit. If the word “Inuit” is strange to you, then perhaps you have heard Eskimo. Well, Inuit is the proper name for Eskimos.

The Inuit have adapted their lives to the extreme conditions of the Arctic Desert. Generally, building materials are difficult to come by in the Arctic Desert. As such, during the winter, the Inuit construct snow huts called Igloos. When summer reaches, their Igloos melt. They then live in tents made from animal skins and bones.

Given the extreme conditions of the desert, plants do not grow. As such, the Inuit don’t grow crops. They feed mainly on the meat of animals and fish. Therefore, their source of food comes from fishing, as well as hunting seals, walruses and whales.

In order to survive the extreme cold, the Inuit need to find a way to stay warm. They achieve this by wearing thick clothes and boots made from animal skins and fur. Perhaps their most popular attire is a large thick coat called a “parka”. Parkas are an outer coat worn to protect the body against extreme cold.

To travel from one point to another, the Inuit usually use dog-sleds. The sleds are made out of animal skins and bones. They are pulled by strong, thick-furred dogs called huskies. The huskies are specially bred by the Inuit to transport them around.

The Inuit are a proud and diverse people. In Inuktitut (their language), the word Inuit translates as “the people.” The Inuit are a communal based society. All their lives are rotated around the community. Their culture is characterized by lore, myth and mythology. Most of their values are embedded in lore and myths. As such, story-telling is an important part of their culture. It is not only for entertainment, but also to pass on cultural values to the next generation. Dancing also plays an important role for socialization, romance and marriage.

Inuit communities are found in various parts of the Arctic Desert. In Greenland, they go by the name Inupiat or Yupik. In Russia, they are referred to as the Yupik. Irrespective of their name or location, the Inuit speak the same language, Inuktitut. They also have similar cultural norms and practices.