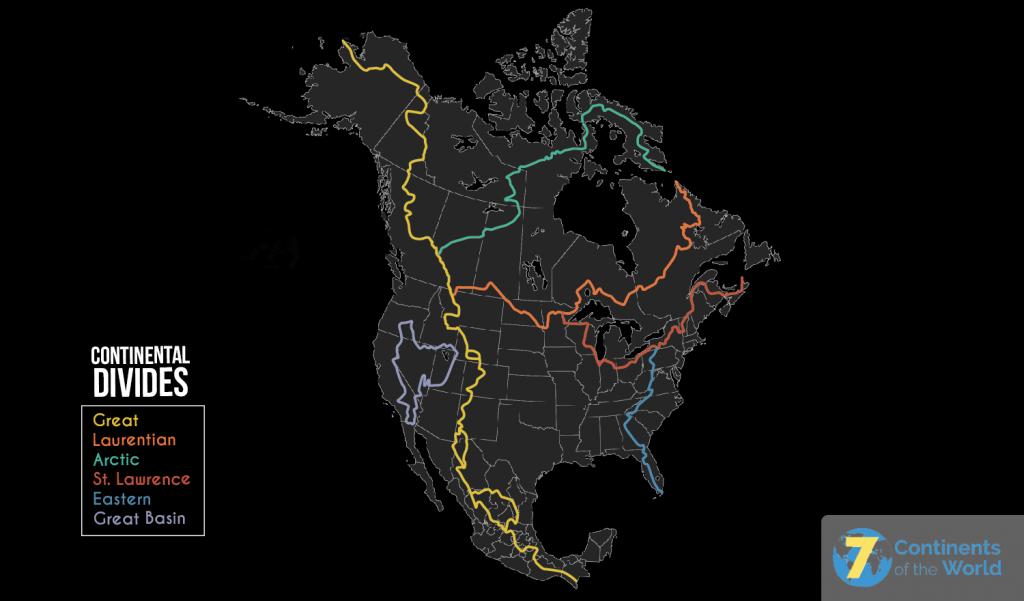 As mentioned above, continental divides occur naturally all over the world, and the definition is simple. A continental divide separates a land mass into two water drainage systems: the land on one side of the divide drains to one ocean or sea, and the land on the other side of the divide drains to another ocean or sea. In the case of the North American continental divide (shown in yellow on the above map is also known as the Great Continental Divide), the water either drains to the left side (Pacific Ocean) or the right side (eventually to the Gulf of Mexico or the Atlantic Ocean).

Characteristics of the Continental Divide

Most scientists believe that under the immediate surface of the Earth, there are large, constantly moving slabs of rock, referred to as tectonic plates. These slabs move very slowly- no more than a few inches per year- but when they collide, watch out! When these plates shift, many things can happen- they can leave empty space, creating a trench in the ocean, they can slide past one another, creating an earthquake, or they can crash into each other, pushing rock upward and creating brand-new mountain ranges. Most scientists believe that the Rocky Mountains formed due to two tectonic plates crashing into each other and creating shock waves, which eventually created the high peaks we see in the Western United States. Of course, this happens very slowly- it takes millions of years for a new mountain range to fully form.

The North American continental divide trail is a popular spot for hikers. The trail runs from Mexico, through the United States and up to Canada, and is often referred to as a “living map of the West.” If you’re attempting to hike the continental divide trail, do research and prepare yourself- this trail is not for the faint of heart! It’s beautiful, but from the steep peaks of the Rocky Mountains to the wildlife who call the area home, the trail can be quite dangerous. The unique topography of the continental divide makes it a great habitat for many unique animals. When hiking in the Rocky Mountains, it’s not unusual to see buffalo, bears, mountain goats, and otters. If you’re on the Northern end of the divide (in Canada) you may even come across a lynx- a rare type of large wildcat.

Continental divides occur allover planet earth. Below is a map that shows the different divides across the seven continents. Because most continental divides create elevated land masses such as mountains, the divides generally direct rainfall to one side or the other which has a profound effect on farming, food supply, trade, wildlife, plant life and much more. The basins in gray are areas that are surrounded by divides and water does not drain into any of the five oceans. 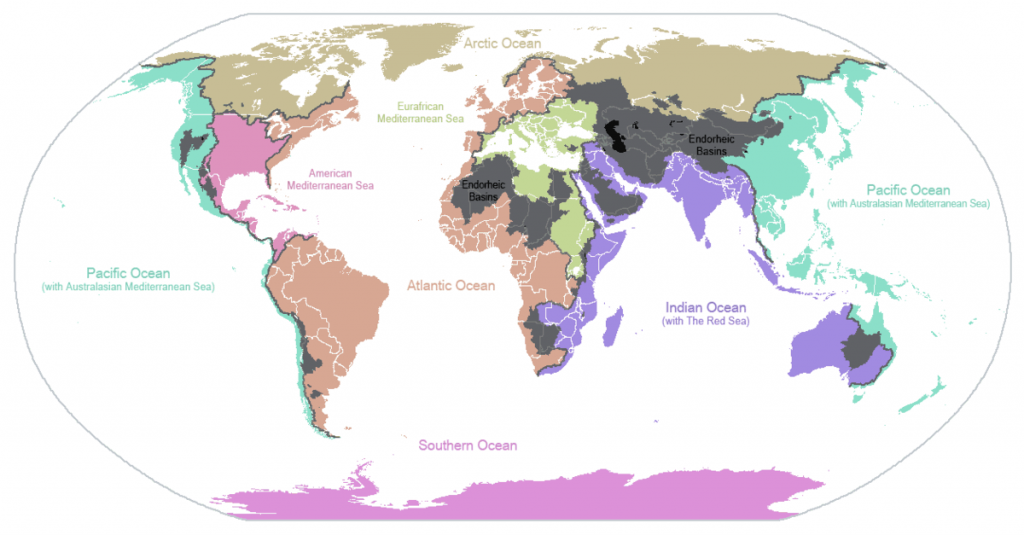