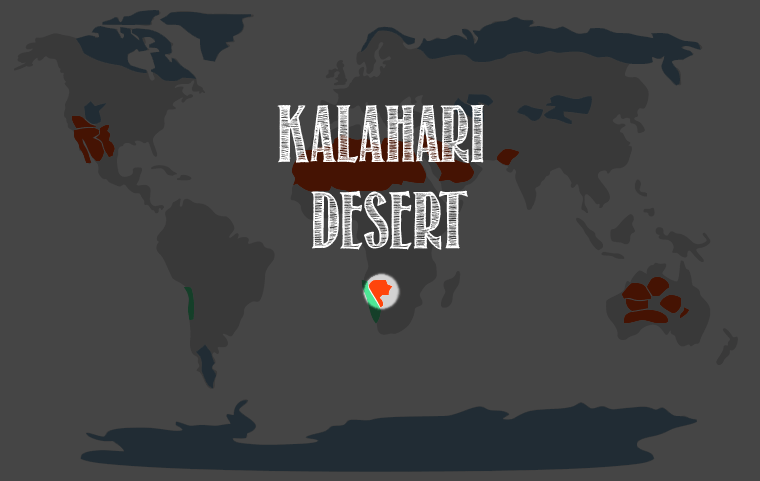 The Kalahari Desert is an expansive sandy region that cuts across Botswana, Namibia and South Africa. The Kalahari sand dunes merge to form the largest continuous mass of sand in the world. Although the Sahara Desert is larger than the Kalahari, the former has only 15 percent of its total area occupied by sand dunes.

The Kalahari is not an ideal desert, at least by desert classification standards. In fact, it receives too much precipitation for a desert region receiving between 5 to 10 inches of rainfall annually. The aridity and semi-aridity of the desert come from the expansive sandy terrain that filters precipitation aggressively, leaving the surface devoid of any water. The Kalahari derives its name from the Tswana term, Keir, which means, “the great thirst”, or Karagare, a tribal word meaning “a waterless place”.

Geography and Location of the Kalahari Desert

The Kalahari Desert, which is part of the 970,000-square-mile Kalahari Basin, stretches about 360,000 square miles (930,000 square kilometers) across South Africa, Botswana, and Namibia. More specifically, it occupies nearly all of Botswana, a third of Eastern Namibia, and the northernmost region of North Cape Province, South Africa.

Southwestern Kalahari merges with the Namib Desert of the Namibian coast. The longest north-south extent of the Kalahari is roughly 1,000 miles (1,600 kilometers) while the east-west equivalent is roughly 600 miles (965.6 kilometers).

The desert is a plain covered by sand. Its average elevation is 1,000 meters (3281 feet) above sea level. Three main surfaces cover nearly all of the Kalahari: longitudinal dunes, vleis (pans), and sand sheets. Dunes are at least one mile long.

Kalahari soils are majorly sandy, and red, brown, or white in some regions. They have little organic content. The soils are also extremely dry and alkaline. In the pans and areas surrounding them, the soils are saline or calcareous. They also tend to be toxic to most vegetation.

Climate of the Kalahari Desert

Northwestern Kalahari defies the climatic definition of a desert because it records a mean annual precipitation of over 20 inches (Above 600 millimeters). The precipitation, mostly in the form of rain, is caused by moisture-rich air blowing from the Indian Ocean. Southwestern Kalahari is a true desert. It receives less than 5 inches of precipitation annually. Much of the Kalahari rain falls during summer, in the form of thunderstorms. Rainfall in the region, however, varies from year to year and place to place. Winters in the Kalahari are extremely dry, characterized by low humidity and no rainfall.

Summer temperatures in the Kalahari rise to as high as 400 Celsius (1040 Fahrenheit). During winter nights, temperatures drop to as low as -120C (100F). Winter lasts from June to August. During this period, the climate is enjoyable. The air tends to be dry and day temperatures are moderate at about 250 C. The high altitude and dry air of the Kalahari contribute to the high insulation heating during the day and aggressive radiation heat loss during the nights.

Plants and Animals of the Kalahari Desert

The Kalahari has a decent vegetation cover comprising mainly of shrubs, deciduous trees, and grass tussocks. The vegetation has adapted to the erratic and infrequent rainfall. The drier southwestern region of the desert, which has low precipitation, consists mainly of short grasses and shrubs, which are drought-tolerant. The region has very few trees or large bushes. Central Kalahari, which receives higher rainfall than the southwest, has scattered acacia tree species, grass, and shrubs.

Northern Kalahari’s vegetation has no indication of desert life. The region has palm trees, open woodlands, deciduous and evergreen forests with trees growing to heights of 50 feet. Some are even suitable for timber. The Baobab is a popular and unusual tree that grows in Northern Kalahari.

The Kalahari has a many types of animal life though varied in the North more than in the South. Despite the variation, many animal species thrive and survive for long periods of time without surface water in the arid south. The springbok, hartebeest, and gun (wildebeest) are the dominant species in the south. The gemsbok (Oryx), steenbok, duiker, kudu, and eland appear in large herds.

Northern Kalahari is your typical national park supporting a large variety of animals-zebras, elephants, giraffes, antelopes, and buffaloes. Predators such as cheetahs, leopards, lions, foxes, and hunting dogs also thrive in the North. Hyenas, jackals, warthogs, anteaters, beats, baboons, hares, and porcupines are medium-sized mammals found in there. The area also has a variety of rodents, lizards, snakes and a robust birdlife.

People and Cultures of the Kalahari Desert

The primary inhabitants of the Kalahari are Bantu-speaking Africans, the Khoisan-speaking San, and small groups of Europeans. The San have lived in the Kalahari for the last 20,000 years. This makes them Southern Africa’s oldest continuous residents. They are nomadic hunter-gatherers. Today, however, the remaining San have adopted sedentary lifestyles binding them to towns and modern life. Most San are now employees at cattle ranches in the Ghanzi District. Very few San continue to hunt and gather in the wild.

The Bantu speakers, the Tswana, Herero, and Kgalagadi, came to the Kalahari in the late 18th century. In the remoter parts of the Kalahari, the Bantu live in villages hosting between 200 and 5,000 people. They live mostly in single-roomed huts with thatched roofs and mud walls. Cattle rearing, the Bantu’s main economic activity, takes place in the villages’ outskirts. Goats provide milk and meat for domestic consumption. They have state-run primary schools and the main means of local transport are donkeys and horses.

The Central Kalahari and Khutse game reserves in Botswana and the Kgalagadi Transfrontier Park, which joins Kalahari Gemsbok National Park (South Africa) and the Gemsbok National Park (Botswana), are the largest protected areas in the region. The last three combined to form the Peace Park in 2000. Mining activity is prevalent in the Kalahari. The chief mineral is diamond, whose mining began in 1971 at Opara.