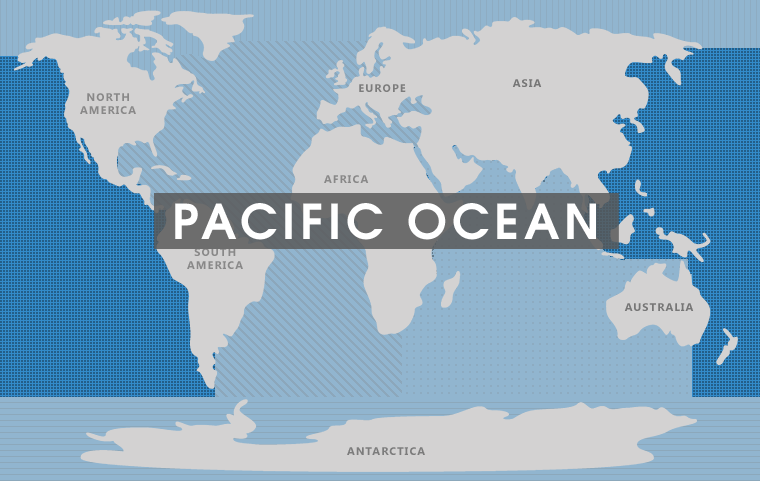 The Pacific Ocean is the biggest ocean on Earth, with an area of 63.8 million square miles. It is also bigger than all the land on the planet put together. It borders four continents: North America, South America, Australia, and Asia. The ocean is split into two parts that are divided by the equator. The two parts are the North Pacific Ocean and the South Pacific Ocean. The deepest part of the ocean and the whole world is the Mariana Trench, and it is 35,797 feet deep.

History of the Pacific Ocean

In the early 16th century, Europeans were the first to see the Pacific Ocean. Vasco Núñez de Balboa was a Spanish explorer that named the sea Mar Del Sur in 1513. But, the Pacific Ocean name came from Ferdinand Magellan, a Portuguese explorer who went on a world expedition in 1521. He named it Mar Pacifico in Portuguese, which means peaceful sea. The width of the ocean was accurately measured in 1768 by Pierre-Antoine Véron.

Features of the Pacific Ocean

The Pacific Ocean separates North America and South America from Australia and Asia. It spreads from the Arctic area in the north to the Antarctic in the south. It stretches to 12,300 miles wide from Colombia to Indonesia, which is halfway across the planet. This number is over five times the width of the moon.

Every year, the Pacific Ocean shrinks approximately one inch on three sides. This is because of tectonic plates underneath the surface of the Earth. The Pacific Ocean experiences many tropical storms every year, and many areas around the ocean have earthquakes and volcanoes. The Pacific Ring of Fire is the world’s biggest chain of volcanoes, with a total of 452 volcanoes.

About 50.1 percent of the ocean water on Earth is in the Pacific Ocean, measuring about 680 million cubic miles of water. The temperature of the water is very cold in some areas around 29.5 °F and then very warm at about 86 °F by the equator. It is most salty in the southeastern parts and the least salty in the far north.

Economy of the Pacific Ocean

The Pacific Ocean is used for many things to make money for countries. In the shallow areas around Australia and New Zealand, natural gas and petroleum are pulled out. Pearls are collected on the coasts of the Philippines, Panama, Australia, Japan, Nicaragua, and New Guinea.

Fishing is a common activity in many areas of the Pacific Ocean. The shallow water has a lot more fish, including shellfish, salmon, herring, and swordfish. Over-fishing is a big problem in some places in the ocean.