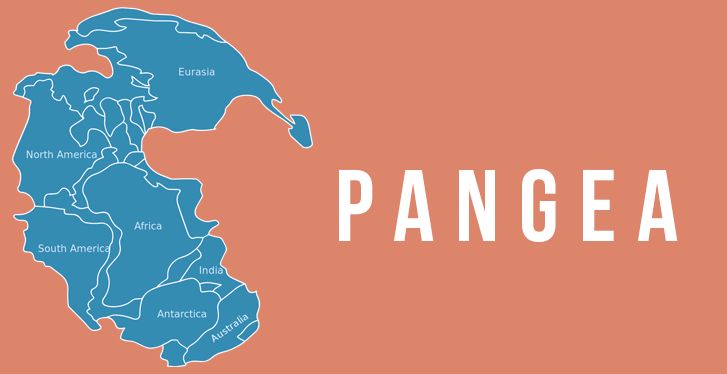 Pangea was a supercontinent that existed up until about 175 million years. Pangea’s name comes from “pan,” which means ‘universal,’ and “gea,” which means ‘land.’ Pangea’s lifespan ran from the early Paleozoic era through the Mesozoic period. During these phases in the Earth’s history, early forms of dinosaur were the dominant creatures on the Earth and in its oceans. The Mesozoic era is divided up into three major periods; the Triassic, the Jurassic, and the Cretaceous periods. These are the well-known time periods during which the dinosaurs ruled the Earth and their histories have been well documented with evidence from the fossil record.

Pangea was assembled from other earlier continents about 300 million years ago. It began to break up at the end of the Mesozoic period due to the forces of continental drift. In contrast to today’s Earth- where the world’s land masses are fairly evenly spread out over the globe, the supercontinent Pangaea was isolated in the southern hemisphere, surrounded by a superocean known by geological historians as Panthalassa. Pangaea was Earth’s last supercontinent, and it was the first to be theorized about and modeled by geophysicists.

The Pangea Theory is based on the evidence of continental drift, and also fossil evidence which links the species which lived on continents that were joined at one time. For example, it is known that the trees of North America and Asia have a recent common ancestry. This is evidence that these two land masses once shared a direct connection when their coastlines were joined- forming a single landmass. These types of evidence have helped to back up the theory of Pangea with many examples from various coastlines that were once joined within the massive shorelines of the supercontinent.

The definition of a Supercontinent: A supercontinent is a landmass made up of other land masses. Geologists believe there were other supercontinents before Pangea as continental drift has been changing the face of the Earth for billions of years.

The evidence for the theory of Pangea is based on a wide range of physical, geographical, fossil-based and other types of evidence- much of which is evident in the plants and animals that live in parts of the world that were once connected.

Today, much of what we know about the Earth’s fossil record and geology makes the topic of Pangea an excellent introduction to ancient history, prehistoric life science, and other important scientific topics.

Pangea was the first supercontinent to be modeled by scientists because of its relatively recent existence, and anyone can see by looking at a globe that the many continents of the world today have matching edges where they once fit together neatly like pieces in a jigsaw puzzle. Other supercontinents are believed to have existed before Pangea, but these are much more difficult to model, as doing so requires a deeper knowledge of the movements of tectonic plates and the details of Earth’s fossil record.

The idea of Continental Drift is an important part of the theory of Pangea and explains how the continents have changed their position over time on the surface of the Earth. This theory was formalized in 1912 by the meteorologist and geophysicist, Alfred Wegener.

It is believed that the formation of Pangea was completed over 300 million years ago during the early stages of the Earth’s Paleozoic era. This was a period in the Earth’s history when many marine animals began evolving into more amphibious types of creatures. It’s not hard to imagine why this would happen as bodies of water between the separate continents were closing as land masses moved together gradually to form Pangea.

As the Earth’s molten core slowly cools over the course of billions of years, the tectonic plates that are beneath the surface of the planet shift. Sometimes the plates collide and form mountains and other major geological features that we are familiar with today. Other times, one of two colliding tectonic plates would be forced beneath the other resulting in a process known as subduction. Over many millions of years, this effect of continental drift causes the surface of the Earth to change dramatically. Previous supercontinents would be totally unfamiliar to us today, unlike Pangea- which contains all of the familiar continent shapes that we can find on a modern globe.

Geophysicists have placed the beginning of the break-up of Pangea at about 175 million years ago. While continental drift has been in effect for as long as the Earth has been in existence, (about 4 and a half billion years), its effects on plants and animals are most noticeable around the times when coastlines meet and separate. These kinds of changes are dramatic, even on evolutionary time scales. This, to a large extent, is the reason we find the fossils of ancient sea creatures in arid and elevated parts of the world today.

Indeed, the theory of Pangea explains why much of the natural world, and the ancient fossil record, appears the way it does to us today.

Curious as to what our current world would look like if Pangea had never drifted apart into separate continents? The map below shows where the countries of the world would fall on the supercontinent of Pangea!