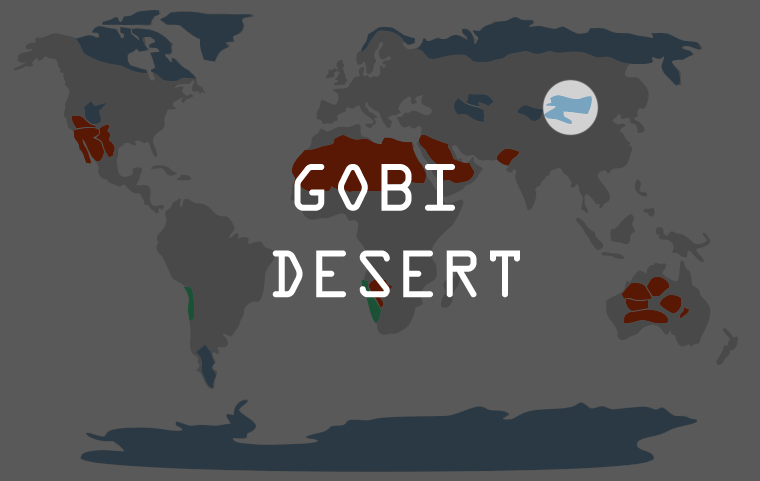 The Gobi Desert (“gobi” literally means waterless place) constitutes huge stretches of land belonging to both China and Mongolia. Contrary to the sandy desert picture that comes up in our minds, a large part of this vast desert consists of bare rock surfaces. The rocky desert is silent, harsh and starkly isolated. The landscape is as varied as it can be: canyons filled with ice, dinosaur fossils, rocky terrain, and sand dunes. The desert has come to be because the Himalayas block the rain-laden clouds coming in from the Indian Ocean.

The Gobi Desert stretches to vast areas, measuring about 1600 kilometers across the diagonal and 800 kilometers from the north to the south. It is the largest desert in Asia and the fifth largest in the world. Made up of semi-desert and desert areas, Gobi stretches from the base of the Pamirs (77 degrees east) and Da Hinggan (116 to 118 degree east) range in the east. It is bounded by the Altai, Sayan and Hangayn mountain ranges in the north, Bei Mountains and Huang He Valley in the south and the Tarim Basin in the west. The desert is the widest in the western side.

Climate of the Gobi Desert

The fact that it is located in the north and lies on a plateau almost 5000 feet above the sea level, Gobi is a cold desert with extreme temperatures and sparse rainfall. There is an occasional snowfall that occurs on the dunes. Whereas the summer temperatures go up to 122 degrees Fahrenheit, the winter temperatures drop to as low as 40 degrees Fahrenheit. Changes in temperature are rapid even in a single day. The rainfall occurs during summers. The annual rainfall is about 7.6 inches in a year. Gobi briefly receives rains during the southeast monsoons. However, the weather is largely dry with very low humidity levels. The winters witness snowfalls brought in by winds from the Siberian steppes. In short, the desert experiences severe winters, dry and cold springs and warm summers. There are winds from the north and northwestern sides during the autumns, winters, and springs.

The Gobi Desert has sparse vegetation and cannot be eaten by livestock. The landscape consists of flat hills, hollows and crests amidst the plains. The soil consists of gypsum and rock salt and is colored grayish brown. A little more vegetation in the form of tamarisk shrubs and saxaulon are found near river beds. A few halophytes or salt-tolerant plants are also seen. The rocky crests are barren and dry. Saltwort and sagebrush along with spots of bridlegrass and needle grass dot the landscape. In the outer regions of the desert, in the northern and eastern sides, the landscape dons the looks of steppes and is less harsh.

In spite of the harsh climatic conditions, there are a variety of animals that make Gobi Desert their home. Bactrian camels, Mongolian wild ass, brown bears, wolves, snow leopards, black-tailed gazelles, etc., are some of the animals found in the region. The desert is drained by underground streams of water. Many of the surface rivers flow only for limited periods in a year and remain dry otherwise. The subterranean streams are of better quality and are helpful to raise cattle. Mongolian grasslands see herds of cashmere goat raised by nomads. The Gobi Desert is a place where a number of fossil remains of dinosaurs have been found. Excavations conducted in the northwestern part have unearthed dinosaur remains and eggs that are over 100,000 years old.

In a bid to preserve the native flora, fauna and other resources Great Gobi A, Gobi Gurvansaikhan National Park, Great Gobi B are nature reserves that have been set up in the desert.

People and Cultures of the Gobi Desert

Whereas the majority of the people living in the Gobi Desert are of Mongolian origin there are Chinese people who earn their livelihoods as farmers in the outlying areas. Rapid desertification into Chinese farmland is also seen as a reason for the increase in the number of farmers. The density of population is very low (it is approximately one to three persons per square mile) because of low temperatures and harsh climate.

Historically, the Gobi Desert has been sketched as an important part of the Mongol empire and was the location of many important cities in the ancient Silk Route. The region has been able to maintain its culture and traditions from its ancient past.

Most people of the Gobi Desert are nomads and remain as close as possible to animal herds and water. The nomads dwell in felt-covered huts or tents called yurt or ger. They shelter the residents from the heat in the daytime and the cold in the night. They are circular in shape and the design has not changed since the last 2000 years. In spite of the difficult conditions that the nomads have to battle for survival, they are known for their hospitality to visitors that come to their area.