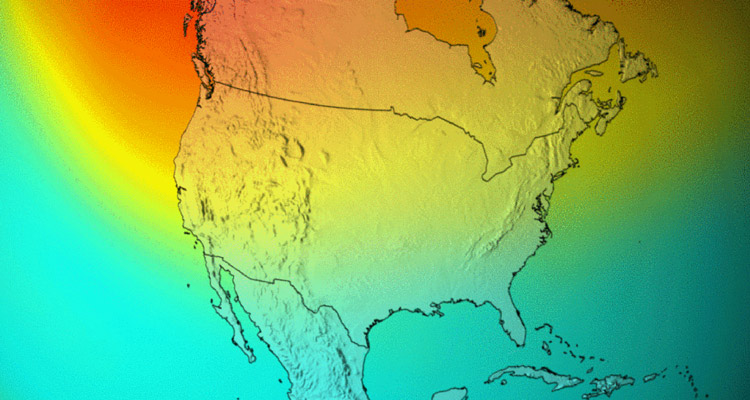 The depletion of the Ozone describes two closely related but distinct phenomena which have been repeatedly observed since the latter 1970s. These are; 1. the steady decline of roughly 4% of the amount of Ozone existing in Earth’s general atmosphere, and 2. a much more significant depletion of the Ozone layer during the Spring season in the stratosphere around the North and South Poles.

The second phenomenon, concerning seasonal depletion of the Ozone over the Poles, is called the Ozone Hole. These large holes are coupled by similar depletion events in the troposphere over the polar regions during the Spring as well.

The formation of the Ozone holes is different to the generalized Ozone depletion effect observed around more equatorial zones where higher concentrations of humans exist. However, while both the Ozone depletion and the Ozone hole effects are different- they share a common causal process which is thought to be responsible for both. This is the effect of human-made atomic halogens.

Many well accredited scientific studies have provided ample evidence for what effects are behind the depletion of the Ozone. Predominantly, researchers have found that it is the introduction of artificial chemicals created by humans which contain bromine or chlorine. These are commonly known as CFCs or ODS chemicals, which is an abbreviation for Ozone-Depleting Substances. ODS have been found to be harmless to the environment, stable, and non-toxic except when they rise and interact with the upper atmosphere. This is why these substances were so easily approved for use in products designed for personal use by humans.

The unfortunate consequence of the high stability of these chemicals, however, is that because they are also particularly light and inert- they tend to make their ways into the upper atmosphere where they disrupt the Earth’s protective Ozone shield.

While these substances were well studied prior to use by humans in such products as hairspray, refrigerant, and other convenience related items- unfortunately, no one ever thought to study the ways these chemicals would interact with molecules in the Ozone layer until long after their effects were detected.

Bromine and chlorine have the uncanny ability to strip a critical atom off of the all-important Ozone molecule. A single chlorine molecule has the ability to destroy thousands of Ozone molecules- and it does it at supersonic speeds.

That means that the ODS in one can of hairspray has the ability to destroy an amount of Ozone equal to the amount of ODS in 1000 cans of hairspray- and of course, hairspray is far from the only product that contains Ozone depleting substances.

Other consumer products that contain these substances include, but are not limited to:

What are the Effects of Ozone Depletion?

The depletion of the Ozone has palpable consequences for people, animals, and the environments they live in. These consequences may be irreparable, as few solutions to the damage done to the Ozone have yet materialized.

Researchers have concluded that the high levels of UV light that are allowed to enter Earth’s lower atmosphere by the permeations in the Ozone layer caused increased levels of skin cancer in humans all over the world. It is a significant factor in the development of malignant melanomas. High UV levels are also linked to increased rates of cataracts in humans.

The growth rates of plants and their ability to regenerate after damage and to resist disease are all hindered by an increased rate of UV permeation of the lower atmosphere by UV light. These effects on the flora of the world have a significant effect on agriculture and the global food supply. It is related to increases in the cost of food products of all kinds, which in turn- has the most dramatic effects on the poorest and most vulnerable populations on the planet first.

Just as terrestrial plants are hindered in their ability to regenerate, grow, and produce oxygen- so are the phytoplankton and seaweed forests of the deep ocean. While the ocean water does provide some protection from the added radiological heat from increased levels of UV, it does not protect ocean plants from exposure to UV light itself. The ocean’s flora is responsible for providing over 50% of the Earth’s oxygen, which we all need to survive. Even if these systems are hindered by only a small percentage, the total amount of available oxygen globally could be decreased significantly by the reduction of sea plant’s ability to produce it.

While all of the above effects are well studied and reasonably prognosticated, it is certain that the predictable effects of Ozone depletion will reverberate throughout the natural world in further ways that could be very difficult to predict. Consider, for example, the fact that biologists believe that the atmosphere was much more oxygen-rich during the time of the dinosaurs. It is fairly well substantiated that these larger animals could only exist in an atmosphere where oxygen was much more highly available than it is now. Therefore, it stands to reason that, as the effects of Ozone depletion continue to multiply, the character and diversity of Earth’s biological inhabitants will change. Larger animals like elephants, whales, and eventually humans will become unsustainable.

It may a be a distant future when humans and large mammals are no longer present on Earth, but the damage we do to the atmosphere also has direct effects on the quality of our everyday lives which may not be reversible- but that can certainly be halted if people of the world act soon to halt it.