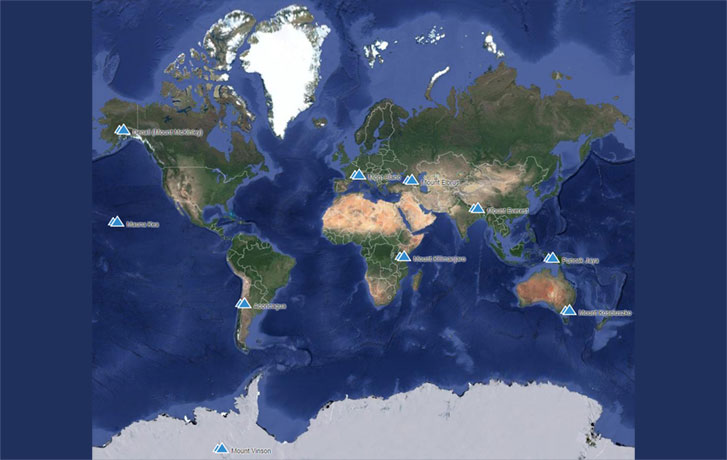 The mountains of the world are a unique set of peaks, rock, volcanoes, glaciers, snow, and ice that are as diverse as life itself. Below you will find a sampling of the highest mountains from each of the seven continents. Though many of the highest peaks are found in Asia as part of the Tibetan plateau, there are many areas across the globe where you can find some of the most notable and highest reaching mountains.

Interactive Mountains of the World Map

Located in the country of Australia, Mount Kosciusko is the largest mountain in mainland Australia standing at 2,228 meters (8,310 ft) above sea level.  It can be found within the largest national park in Australia called Kosciuszko National Park. Some areas of Mount Kosciuszko have rare plants and flowers found nowhere else on planet Earth. Local peoples often refer to the mountain as “Kozzy.” On the way to the summit of the mountain you can make a stop at Australia’s highest toilet found just below the summit!

Also known as Carstensz Pyramid, this mountain is the highest peak in the Pacific Basin rising 4,884 meters (16,024 ft) above sea level and is also credited with being the largest mountain on the continent of Australia (Oceania). Located in the country of Indonesia, Puncak Jaya sits very close to the equator which keeps its temperature at a stable 0.5°C (32.9°F) year round. The glaciers that surround the mountain are vanishing quickly and it is expected that they will have fully melted in 2016.

Towering 5,621 meters (18,442 ft) above sea level, Mount Elbrus is the highest mountain in both Russia and Europe and the 10th highest mountain in the world. Elbrus is the remnant of a dormant dome volcano which was formed more than 2.5 million years ago. The most recent eruption occurred nearly 2,000 years ago. Mount Elbrus also happens to sit on the  dividing line between Europe and the continent of Asia.

The name itself means “white mountain,” which of course describes Mont Blanc perfectly. It is the highest mountain in the Alps and the second highest on the continent of Europe after Mount Elbrus. Mont Blanc extends 4,808 meters (15,777 ft) above sea level though the height varies from year to year due to the amount of snow it receives. It lies in-between both Italy and France which is why a tunnel was created through the mountain that is more than 7 miles long!

Denali represents the highest point on the continent of North America standing at 5,500 meters (20,310 ft) above sea level.  It is located in the state of Alaska which is part of the United States of America. The name “Denali” comes from the Koyukon people who have inhabited the area around the mountain for hundreds of years. Denali’s upper half is permanently covered with snow as well as several glaciers as the temperature can reach –60°C (-75°F).

Aconcagua is the highest point on the continent of South America and the highest point outside the continent of Asia. It is part of the longest mountain range on planet Earth, called the Andes mountain range  which stretches more than 4,300 miles from North to South. At its highest point, the mountain reaches 6,961 meters (22,838 ft) above sea level dating the formation of Aconcagua  to before the Jurassic Period. Amazingly, Aconcagua was climbed by the ancient Incas though no proof is available to support that they made it to the summit.

As the highest reaching mountain in Africa, Mount Kilimanjaro extends 5,895 meters (19,308 ft) above sea level. Located in Tanzania, it was formed due to three volcanic cones pushing it ever higher thought now it is considered dormant. Mount Kilimanjaro is the highest free-standing mountain on the planet (meaning it stands alone and not part of a mountain range.) An 85 year old woman named Anne Lorimore is the oldest person to reach the summit while the youngest was only 7 years old!

Located on the continent of Antarctica, Mount Vinson or Vinson Massif is the highest point on its continent at a height of 4,892 meters (16,050 ft.) The mountain was not discovered until 1957 when a U.S. Navy aircraft spotted it.  Of all the mountains of the world, Mount Vinson offers the coldest temperature with a recorded –89.2°C (-128.6°F) nearby. There are also periods of time during the summer where Mount Vinson will have 24 hours a day sunlight!

At a height of just 4,207 meters (13,802 ft) above sea level, Mauna Kea may not seem noteworthy even though it is the highest point in the state of Hawaii. If you were to measure Mauna Kea from the surface of the ocean floor to its peak, it would measure a massive 10,000 meters (33,000 ft) tall, which would easily make it the tallest mountain on the planet. Mauna Kea is a dormant volcano with its last eruption estimated to be at least 4,000 years ago. There are also more than a dozen large telescopes atop the mountain observing deep space!