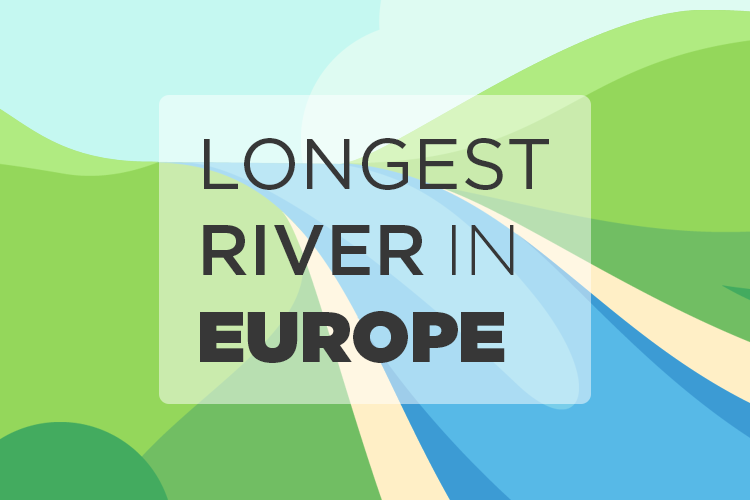 Numerous rivers wind through the landscape of Europe, but there are actually two that compete for the top spot as “longest European river.”

Determining the true winner is difficult because the boundaries of “Europe” can be interpreted in two ways. First, many people consider Europe as the western half of Eurasia. This includes the British Isles and Western, Central, and Eastern Europe as well as the western half of Russia. On the other hand, some regard present-day Europe as only the countries that are included in the European Union political alliance.

The Volga River is one of the greatest rivers in the world. And though it’s just the 18th longest river in the world, it is by far the longest in continental Europe.

The Volga starts and ends in Russia. It extends for 2,193 miles or 3,530 kilometers and is fed mostly by melted snow, rainwater, and groundwater. Its source is northwest of Moscow in the Valdai Hills, where it begins at a height above sea level of approximately 740 feat or 225 meters. It empties into the Caspian Sea.

As the major waterway flowing through a country with little ocean coastline, it’s no wonder that over half of the largest 20 cities in Russia are located in the watershed of the Volga. These cities include Moscow, Nizhny Novgorod, Gorodets, and Rzhev among others. As a result of this particular population dispersion, approximately 40 percent of Russians have settled along the Volga River and its various tributaries.

In the last two centuries, Russians have built dams, reservoirs, and canals along the Volga in order to extend the area in which large boats can pass and therefore promote commerce. This has contributed greatly to Russia’s economy, but along with pollution, it has had negative ecological effects on the region.

The word “Volga” is Slavic and means “moisture” or “wetness.” In Russian, the River Volga has significant meaning. Known as Volga-Matushka or “Mother Volga,” it is often a central part of Russian folklore and literature.

The  Danube: Longest River in the European Union

The Danube River is predominantly contained in Eastern and Central Europe. It begins in Germany in Donaueschingen in the Black Forest Mountains and runs for 1,770 miles or 2,850 kilometers along the European continent before emptying into the Black Sea in Romania.

Like the Volga, the Danube played a large role in how Eastern and Central Europe was settled. Its length runs through ten countries, which is more than any other river in the world. These countries are Germany, Austria, Slovakia, Hungary, Croatia, Serbia, Bulgaria, Ukraine, Moldova, and Romania. Numerous major cities and capitals are likewise positioned along its banks. These include Vienna (capital of Austria), Bratislava (capital of Slovakia), Budapest (capital of Hungary), Belgrade (capital of Serbia), and numerous other large municipalities.

Historically, the Danube was an exceptionally important river to the Greeks and Romans. When Roman rule was at its height during the reign of Julius Caesar, it acted as the northern boundary for the empire. This meant that Roman ships guarded its waters, and various Roman cities eventually cropped up along the banks. Many of them became important current-day cities that we know today. For example, Budapest began as the Roman city of Aquincum, Belgrade was originally Singidunum, and Vienna was Vindobona. The Romans called the Danube “Danuvius.”

Before and during the industrial revolution, the Danube was a key mode of transportation and acted as a highway for commerce. Today, you’ll still see the banks of the Danube lined with fortresses and castles from bygone powers of the region, like Charlemagne, first emperor of the Holy Roman Empire and Maria Theresa, queen of Bohemia and Hungary in the 1700s . In 1867, a famous waltz was written by Johann Strauss about the river. It was entitled “An der schönen blauen Donau,” (“On the Beautiful Blue Danube”).