There are many features of our world that make the planet especially well suited to life on Earth. Our ideal distance from the Sun, the abundance of life-giving water, the plethora of nutritious materials and natural resources are among the most outstanding of these features. But we would be ill served to forget the Ozone Layer. This magnificent feature of our atmosphere is as necessary for life on Earth as it is strange and wonderful. Here, we will discuss the nature of the Ozone Layer, why it is so important, and what we can do to preserve it. 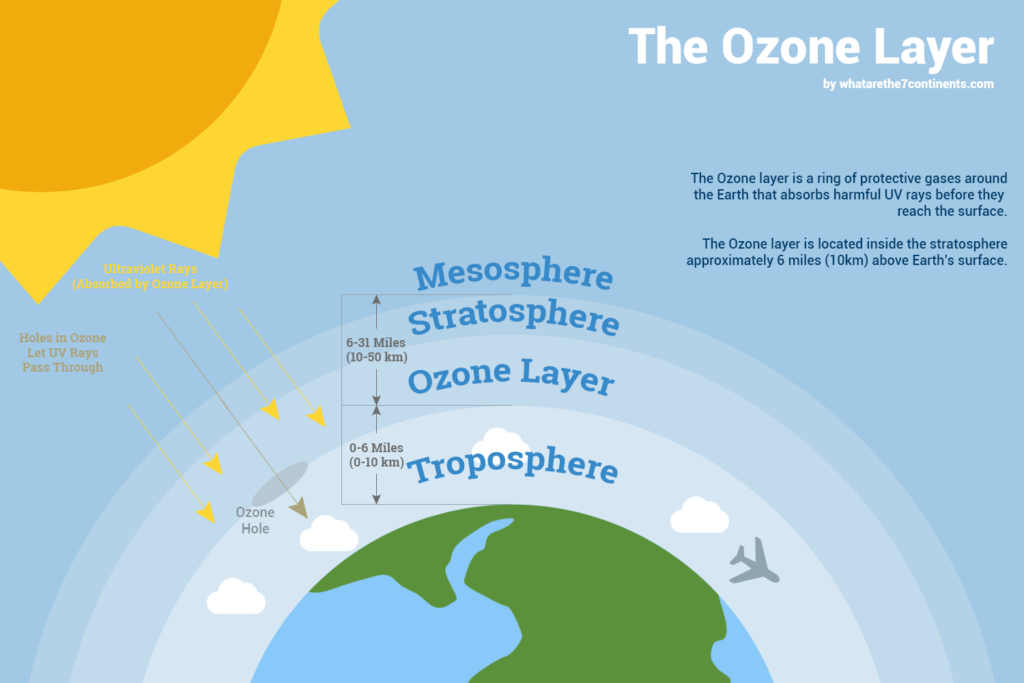 What is the Ozone Layer?

Earth’s atmosphere is made up of several layers. In order from lowest to highest, they are the Troposphere, the Ozone Layer, and the Stratosphere. While the ozone layer is often counted as its own distinct portion of the atmosphere, many scientists consider it to be a part of the Stratosphere. The area where we live is often called the biosphere because that is where most living things exist- but speaking in atmospheric terms, it is really intermingled with the Troposphere.

Some people believe the word ‘ozone’ refers to the location of the ozone layer because it contains the word ‘zone.’ But ozone refers to the predominant chemical that makes up the ozone layer. Ozone is a lighter than air molecule that is made up of three oxygen atoms. It is a very common substance that can be readily made via natural processes. You may smell ozone after a lightning strike or if you are near to an open electrical spark.

Around the middle of the 19th-century people started using substances called Chlorofluorocarbons, or CFCs. These are extremely useful for industrial purposes and in the home. We find them in refrigerators, aerosol products like hairspray, whipped cream and others. Unfortunately, CFCs destroy ozone when the two come into contact with each other. This is a problem, because ozone is a very important component of Earth’s atmosphere.

Why is the Ozone Layer so important?

The ozone layer is very important for the health and safety of all life on Earth because it protects us from harmful ultraviolet (UV) radiation. UV light is a band of the spectrum of light that is far outside of our ability to see. But despite the fact that we cannot see UV rays, they are extremely intense, can cause burns, and over time can cause damage to our skin which may lead to cancer.

The ozone layer protects us from 97% of the harmful effects of UV rays. Think about a time when you or someone you know spent too much time out in the sun and got a sunburn. Now think about the fact that those burns are just 3% of what they would have been if there was no ozone layer to filter out most of the UV rays. It’s pretty scary when you think about it. Without a healthy ozone layer, life on Earth would be very different.

One of the strangest things about UV radiation is that it can burn your skin even if you do not feel hot. As long as there is direct contact between your skin and sunlight, you can be burned by UV rays. This is why we need the ozone layer. Without it, we couldn’t go outside without special suits- even on cloudy days. This is why it is so important that we protect our precious ozone layer.

You may have heard that an enormous hole in the ozone layer had once formed in the atmosphere. In the 1980s, due to manufacturing processes and home use of CFCs, a hole in the ozone layer covering many millions of square miles above Antarctica had formed. For years, ozone depletion was considered to be the most critical environmental issue.

Fortunately, people did reduce CFC emissions- and through natural processes- the hole in the ozone was able to reform itself. We are very fortunate to live on a planet that can replenish our ozone layer, otherwise, the damage done years ago would have been permanent. We still need to be careful, however. If we do not limit CFC use, we could damage the ozone layer again. This would lead to higher temperatures, and higher rates of skin cancer all over the world.

How is the Ozone Layer formed?

The UV light that the ozone layer protects us from is a necessary component in the creation of ozone molecules. When UV rays strike an oxygen molecule, it breaks the oxygen down into two atoms of oxygen. Then, when those oxygen atoms come into contact with oxygen gas, they join to become ozone.

Even though our atmosphere can heal the ozone layer, CFCs and many other chemicals we use are highly destructive to ozone. One molecule of chlorine or carbon tetrachloride can destroy several thousand molecules of ozone. That means, if we do not regulate the use of these substances- we could overwhelm the natural regeneration of ozone very quickly. We are very lucky to have had the chance to learn our lesson the first time.

Interesting facts about the Ozone Layer

Of course, sunburns are not the only thing the ozone protects us from. Global warming, accelerated weather patterns, damage to crops and other plant life, eye damage, and harm to every aspect of the ecosystem could all result from another massive depletion of ozone.

It’s the unique properties of ozone that enable it to hang high in the atmosphere and create a powerful shield from deadly radiation. Here are a few more interesting facts about ozone that you may not be aware of.