North American rivers have been the hub of civilization and development since humans settled in the region. Many of the continent’s modern cities such as Omaha, St. Louis, and Fairbanks were established because of their proximity to rivers. In addition to offering fresh water for drinking and cleaning, rivers provide many of those towns with water for fertile farmlands. The longest rivers in North America are used to transport goods such as cotton, soybeans, and lumber via barges. Alternative energy companies also continue to explore cost-effective ways to generate hydroelectric power from North America’s rivers.

What is the Longest River in North America

The longest river in North America is the Missouri River. Here are some fun facts about the river, which is nicknamed the “Big Muddy.” 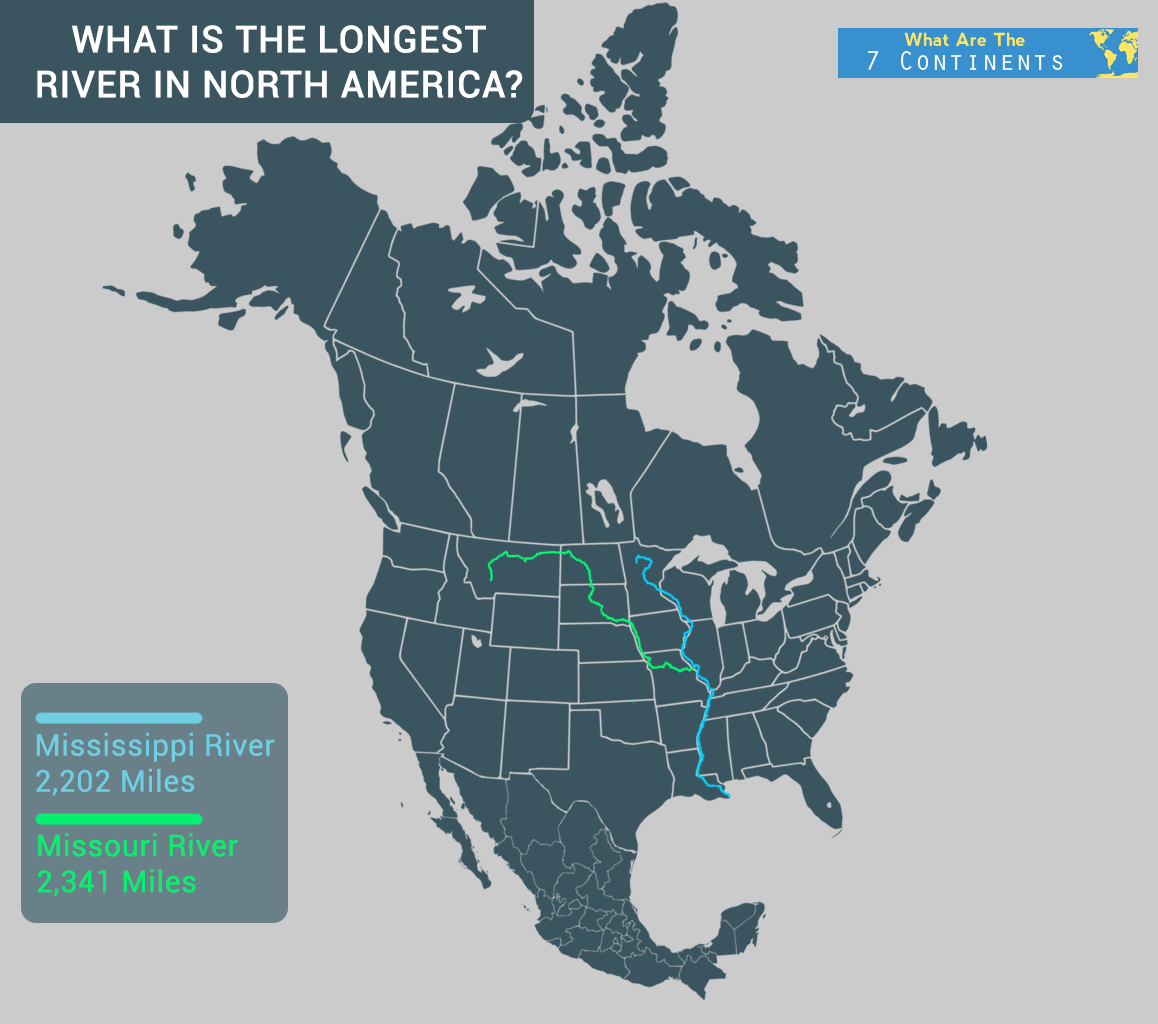 Physical Characteristics of the Missouri River

The Missouri River’s Role in History

The Missouri River got its name from one of the Native American tribes that lived in the area prior to European settlement. The Missouri native peoples and other Great Plains tribes were primarily hunters and fishers who depended heavily on the river and its associated flora and fauna for survival.

The Missouri River is the subject of legends and historical facts. When Europeans first settled in North America, they heard about a waterway that was so long that it stretched from the Atlantic to the Pacific Ocean. This intrigued merchants who got wealthy through fur trading. Military officers, Lewis and Clark, explored the Missouri River in search of the mythical Northwest Passage. They found that the river was long, but it didn’t span the country from coast to coast.

Major Cities and Towns on the Missouri River

These major cities sit along the Missouri River.

Life on the Missouri River Today

Mark Twain once stated, “The Missouri River is too thick to drink but too thin to plow.” The river’s reputation for being dirty, however, doesn’t stop outdoor enthusiasts from making it a recreational hotspot. Boats, canoes, and kayaks are often seen cruising on the Missouri River. Ironically, there is a niche category of SCUBA divers who enjoy exploring the river’s low visibility waters and photographing its aquatic life.

Hydropower is a clean source of renewable energy, and today’s power companies harness the strength of the Missouri River’s currents to produce a good deal of electricity for residents and businesses. According to Missouri’s Department of Economic Development, dams along the river currently support about 36 hydroelectric stations.

Other Rivers in North America

In addition to the Missouri River, these notable waterways represent the top five longest rivers in North America.

You were probably introduced to the mighty Mississippi River during your childhood through Mark Twain’s Adventures of Huckleberry Finn. This river has been the inspiration for authors, artists, and adventure seekers for years.

The Yukon River is located in northwestern North America. It flows between Canada’s British Columbia and Alaska in the United States. Historically, it was used for transportation during the Klondike Gold Rush era.

The Saint Lawrence River is also located in Canada and the United States. It connects the Great Lakes to the Atlantic Ocean.

The Rio Grande flows from southern Colorado into the Gulf of Mexico. It passes through both the United States and Mexico. The river forms a natural border between the two nations. When Mexico ended slavery in the early 19th century, U.S. slaves crossed the Rio Grande seeking freedom across the southern border.

North American rivers attract a variety of wildlife. The Missouri River is home to fish species such as sturgeon, catfish, and striped bass. Osprey, ducks, foxes, and cranes also live along this river and other waterways that are located in the northern regions of the continent. These rivers support plant life that offer food for the animals that live there. You’ll find forms of algae, cattail, and black willow trees in and around North American rivers. River culture remains one of respect for these precious natural resources.